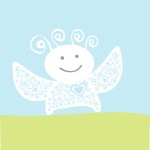 One day last week, my little girl came home with an announcement. She is to be an angel in the Christmas play in school. With her came a list of details about costumes. As you can imagine, the angels’ requirements were: white dress or white top & skirt, white tights, optional wings (colour not specified) & tinsel around the middle & on their heads. She, however, had her own ideas. She had already decided that she wanted to wear this flowery dress (technically it has a white background). She would wear a white top under the dress only & the white tights. No tinsel under any circumstances. Wings yes but no tinsel! A silver hair bow would be acceptable though.

In spite of all the books I’ve read and courses I’ve done, I couldn’t help myself but get into a debate about what she was supposed to wear. I mentioned how every other angel would most likely be in white. That was of no concern to her! She was committed to her costume! A few minutes into the discussion however, I had a light bulb moment. What was I doing? Whoever decreed that angels must wear white anyway? And it is a drama after all and surely drama is about imagination, creativity, and representations?!! And why was I encouraging her to conform and go against her vision for her role- surely this could not be a good thing? And why was I suddenly so worried about what other people would think? And feeling anxious about getting in trouble for not following the rules? (This coming from the girl who at age 13 or so consulted with the school chaplain as to the Catholic church’s position on capital punishment in order to prove to the teacher that it was indeed supported by Catholic doctrine. And in spite of the fact that no-body else in the class agreed with me?!!!)

So I went back to the list of details. Lo and behold, it stated:

These are only suggestions. Please feel free to add your touches. We do not want any parent to buy new clothes or costumes.

Saved by the small print! Oh the relief! Permission to not conform! (Yes, I’m aware of the irony!) We actually do not have a white dress or skirt! Yay- she gets to be the angel she wants to be. No need for further negotiations. The moral of the story? Choose your battles. Question your own stuff echoing across the years from your own childhood. And continue to encourage them to blend in when they need to and stand out when they have the chance!

PS: I have since reversed my position on capital punishment!