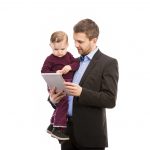 One day in the supermarket I noticed a couple buying groceries. Their little boy (a toddler) was sitting in the trolley seat playing with a smart phone. This little guy was playing with this phone like a pro- both hands, thumbs flying, totally engrossed. This led me to think about my family and our devices. We have no TV.  But we still have managed to accumulate two smart phones, two tablets, a desktop, and a laptop! Now don’t get me wrong, I love technology and I think the internet is brilliant. But I did notice myself getting irritated if I was checking something on my phone and my little girl interrupted. Oh I didn’t like how that felt! It wasn’t like I was checking any critical really.

So what does the research say about children and screen time? It’s complicated! First of all there isn’t a lot of recent research on this although TV has been around for a long time. And it’s hard to come to definite conclusions both because of the lack of research and because three factors tend to interact to affect children’s learning: # 1 characteristics of the child (like temperament and ability to self-regulate), # 2 features of what they’re watching, and #3 the variation in the social and cultural contexts of children’s lives.

Let’s have a look at what’s out there. Brace yourself! One study of 350 children aged 6 months to 4 years in Philadelphia found that by age 4, 50% of the children had their own television and 75% had their own mobile device!! By age 4! Their own television! That shocked me! Almost all the children (96.6%) used mobile devices, and most started using them before they were a year old. At age 2, most of the children used a device daily and spent similar amounts of screen time on both television and mobile devices. Most 3- and 4-year-olds in the study used the devices without any adult help. One-third of the children were able to operate the TV and a tablet at the same time. In adults this kind of media multitasking has been associated with task inefficiency, lapses in attentiveness, and safety hazards. But there’s not enough research yet to understand how it impacts on things like attention span, distractibility, time management, and social interaction in children.

Do babies learn from watching baby videos and DVDs?

One study looked at how many new words 12- to 18-month-old children learned from viewing a popular DVD several times a week for 4 weeks at home. Children who watched the DVD didn’t learn any more words from their month-long exposure to it than did a group of children who were not exposed to it. The best learning actually happened when parents tried to teach their children the same target words during everyday activities. The researchers also found that parents who liked the DVD tended to over-estimate how much their children had learned from it. Your child’s vocabulary growth is directly related to the amount of time you spend talking with them.

Children who’re younger than 24 months of age need hands on exploration of their environment and interaction with parents and caregivers to help develop their language, social-emotional, physical, and cognitive skills. They can’t learn from digital media before age 2. And they have trouble transferring any knowledge from digital media to real life. The key influence on toddlers’ learning from commercial media (from about 15 months of age) is parents watching with them and re-teaching the content. Television viewing in infancy is disruptive to play, reducing the quality and quantity of child-parent interactions. It has been associated with language delay, at least in the short-term.

It’s not all doom and gloom though. One review of research found that children learn better from screen time when the content closely resembles their real life experiences. Think simple stories, familiar objects, and routines. Repeated exposure helps them learn the format and content of screen media and can even offset the negative effects associated with watching particular content. Watching programmes together is also key. But it’s not just watching them together- it’s more about the conversations you have while watching. There are specific things you need to do to get the most from the screen time. I’ll show you how in my next post so be sure and sign up here to get the next post delivered directly to your inbox.

Well-designed programmes such as Sesame Street can improve literacy, social, and cognitive outcomes for children between 3 and 5 years of age. But for most apps that you find under the “educational category” in app stores, there’s no evidence that they actually work. They’re generally not based on any established educational curricula and they use very little if any input from educators or specialists in child development.  Most of them are not designed to encourage two people using them together. Skills that are essential for school success (like creative and flexible thinking, emotional regulation), are best taught and learned through unstructured social play which is much cheaper than a device + internet subscription!

Digital books or ebooks that can be read on a screen often come with interactive features. Research suggests that these features may actually decrease your child’s understanding of the content and interfere with your conversations with them while reading because they’re too distracting. It depends. So, if the ebook has hotspots (where your child clicks on a picture to activate animation) or game zones built-in, these may lead to poor performance on tests of vocabulary and story comprehension in 3-6 year olds. Using those features involves task switching, and like multitasking in general, seems to cause cognitive overload. But, if the ebooks include animated pictures, sometimes enriched with music and sound, that match the simultaneously presented story text at the same time that they’re seeing/reading it, these can help integrate nonverbal information and language and promote storage of those in memory. Or something like a dictionary function with word definitions can also provide useful on-demand help.

Bottom line? Multiple developmental and health concerns continue to exist for young children using all forms of digital media to excess. There’s enough evidence to suggest that children between 2 and 5 years should watch no more than 1 hour a day. This gives them time to do other things that are important for their health, weight, and development.

Here’s what the American Academy of Pediatrics currently suggests:

You can also check out the American Academy of Pediatrics’ advice on creating a family media use plan here.

Don’t worry- your child won’t miss out on anything by your waiting to introduce technology- everything is so intuitive and responsive now that it won’t take much time for them to get the hang of it.

How you talk about what you’re watching together is critical to helping your child’s language development. I’ll show you how to do it in my next post so sign up here to get the next post delivered directly to your email.