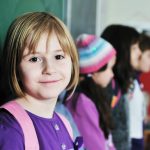 How long should it take for your child to learn English once they start school?

If you and your partner speak home languages and your child begins to learn English when they go to school, you might be worried about how it will all work out. A key thing to remember is that language learning takes time; a long time. It’s a complex process and there are a lot of influencing factors. In 1979, Jim Cummins, a professor of education in Canada made a key distinction between conversational language (called basic interpersonal communication skills (BICS)) and academic language (called cognitive academic language proficiency (CALP). (Of course, it is more complicated than that and there’s a lot of debate about it but it is a useful distinction nonetheless.)

BICS is all about using language for the social purposes of chatting and playing with peers. It takes between one and two years to develop. That’s quicker than learning the language needed for school which is more formal and complex. And you can play with peers without needing to use too much language, initially anyway. That language for social purposes might develop more quickly isn’t that surprising really when you think of all the opportunities that children have for talking and communicating with each other at play time, when doing work together, and, at physical education. So English for conversational purposes, for playing and socializing develops quickly enough for children to connect with peers and friends. In one to two years.

The academic language (CALP) takes longer to develop as children tend to be exposed to it in school only. By academic language, I’m talking about words for concepts in maths and science for example: addition, subtraction, measurement, length, distance. More technical vocabulary that wouldn’t generally crop up in conversation. And as children progress through the school system, this academic language becomes more abstract and complex. Monolingual English-speaking children have a head start here language-wise. When the language of the school is English only, multilingual children who don’t speak it, have to learn the academic language faster to have a chance of catching up. When a child has good conversation ability, it doesn’t mean that their academic language ability is at the same level. We shouldn’t expect it to be the same. And if they’re “under-performing” academically, it’s not necessarily a sign that they have an underlying problem. We need to take into consideration how much experience they’ve had with the language of instruction. We also need to take into account how language-friendly the school is and how they support multilingual children to acquire the language of education.  CALP can take between five and ten years for children to develop. (Some authors say three to seven years) So we need to be patient.

Children who have had little exposure to the language of the school need explicit teaching in order to learn the grammar. Children who have a strong L2 aptitude, motivation, and strong home language skills tend to be more successful at learning the language of the school. Effective community language teachers are those who have strong community language skills, are skillful in teaching methods and have proficiency in the child’s home language. According to that paper, it takes 3-7 years to reach proficiency. Younger learners take longer but are more likely to achieve close to native speaker results. This is more evidence in favour of supporting your home language as much as you can because that solid foundation makes it easier for your child to learn English at school.
The key point to remember is that acquiring language takes time and all aspects of the second language don’t develop at the same pace and at the same time. Some things take longer than others. So for example, your multilingual child who is being educated through English may have basic word decoding skills (being able to sound out and read a word) at similar levels to monolingual English-speaking peers. And at the same time their English vocabulary may lag behind their monolingual peers. The main parts of a story like beginning, characters, setting, plot can be very well-developed in English while their grammar in things like tenses, possessive forms, pronouns can be slower and develop later.

Why is this? Well it makes sense if you think about it. The skills involved in working out what sounds letters make and how to combine them and read a word are largely to do with perception and thinking and the skills works the same way for each language. Same with overall story structure. Those bigger components tend to be fairly stable no matter what language the story is being told in. But many aspects of vocabulary and grammar are specific to each language and they take time to master.

So what can you do to help? Strong home reading practices in your mother tongues will definitely help. When your child has a solid foundation in the home languages and early pre-literacy skills (things like letter and sound knowledge, print awareness and so on), then it makes it easier for them to learn English at school; like ivy growing on a house. You can learn about a research-based way to do this here.

If you want to find out how English grammar develops in children who are learning English as an additional language, be sure and sign up for email updates from Talk Nua in the box above.