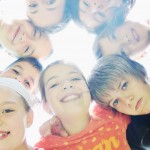 You’re an English speaking family living in Germany. You have two little girls: Lucy age 6 and Abby age 4. They’ve both gone to kindergarten since they were 2 years old. They’re learning German in kindergarten and you speak English at home. Both you and your husband are introverts and Abby can be a little shy and anxious. A few months ago, she suddenly stopped talking in kindergarten. She happily chats away in German at home with her sister but not in the kindergarten. She also talks happily at home when you have visitors. She’s happy going to kindergarten and while she doesn’t talk there, she does communicate clearly. You’re not too worried at the moment and neither is your paediatrician. But the teachers at the kindergarten are very worried. You’re wondering if selective mutism might be the problem. Or could it be part of learning a second language?

#1 they use the home language at school

#4 where they use the 2nd language creatively and spontaneously.

This idea has been around for 30 years or so. But, as it turns out, there isn’t a lot of good quality research to support this idea at all.  There are lots of flaws in the small range of studies that are out there too. Like what’s silence exactly? And very few of the studies look at things that can affect how talkative children might be like the support given by the teacher, the activity they’re doing, how many children are talking with each other and how they get on together.  Bottom line? It’s not accurate to claim that silence is a typical stage that children learning a 2nd language go through. It’s important to remember that language development does take time. Abby has been going to kindergarten for 2 years. That’s not a lot of time when it comes to learning a 2nd language and she might feel self-conscious about her German.

The other possibility is selective mutism. Not a lot of recent research on this either. Basically it’s a rare anxiety disorder that typically starts between the ages of 3 & 4. About 0.7% of children are affected by it. And immigrant children are thought to be at high risk for it. But, and it’s another big but, there are lots of gaps in the research. Children who have selective mutism also tend to experience social anxiety. And speech are language problems are also relatively common in children who have selective mutism.

Learning a second language is a challenge and children who’re shy can find it more challenging because they have to use the language to interact with other children so they can get good at it. Shy children then might have fewer opportunities when it comes to learning the second language. Immigrant children are also coping with cultural differences that they have to navigate. But discomfort due to cultural differences doesn’t lead to silence. True selective mutism in bilingual children has been described as a failure to speak in both languages, in several social situations, and for more than 6 months. So that’s not Abby. It’s complicated though because one of the features of selective mutism is that the child’s silence can’t be due to lack of knowledge or comfort with the spoken language required in the social situation. And it’s not clear what her level of German is. It’s unlikely to be the same as children how have been learning German since they were born.

Children who’re immersed in a new language environment are at greater risk for selective mutism because they may have increased anxiety due to being in a foreign social and language environment. They may become socially isolated at school if they don’t speak the language. Speaking two or more languages doesn’t cause children to go silent. Selective mutism is an anxiety disorder so a child whose temperament is naturally inhibited and who has the additional stress of speaking another language and immersion in an unfamiliar culture, and feeling insecure about their skills can be enough to cause increased anxiety and mutism.

It’s not totally clear yet what exactly is the issue for Abby.

So what can you do right now to help?

The #1 thing is to remove pressure on Abby to speak at kindergarten. The secret is to talk to her without asking any direct questions that need an answer. So, nothing like Aren’t you going to say hello? You’ll need to practice this on friends and family because it doesn’t come easy to most of us.

The best book out there on selective mutism is The Selective Mutism Resource Manual. You can buy it here. Or you could try your local library.

You’ll also need to meet with the teachers to make a plan for school.

Here are 11 tips for the teachers:

Keep an eye on how things are going and spend some time finding out more information. Two useful websites are the SMart Center and the Selective Mutism Association.

Would you like your own question answered here? If so, just email me at marypat@talknua.com

What I read so you don’t have to:

Roberts, T. (2014). Not so silent after all: examination and analysis of the silent stage childhood second language acquisition. Early Childhood Research Quarterly 29:22-40.

Starke, A. (2018). Effects of anxiety, language skills, and cultural adaptation on the development of selective mutism. Journal of Communication Disorders 74: 45-60.