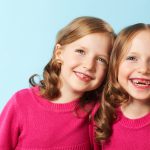 My last post which you can read here is all about language development in monolingual twins. There isn’t a lot of recent research on that topic and there’s even less out there when it comes to multilingual twins. I kept my focus on recent research (within 10 years) and mainly published in scientific journals to keep it high quality. Here’s what I found out so far.

Most of the studies I came across were about trying to tease out the influences of genetics versus the environment when it comes to language acquisition. I couldn’t find very many studies looking at the twinning effect in multilingual twins. (That’s where twins experience a transient early language delay compared with children who are not twins) Children who are acquiring English as a second language seem to be the focus of a lot of the research, from Hong Kong in particular. However, if it’s true for monolingual twins that there is a twinning effect on language, then we can assume that it’s most likely similar for multilingual twins. The same factors will apply in terms of the significance of low and very low birth weights and prematurity. But additional significant factors for bilingual twins will be things like the amount of exposure to their languages, opportunities to use them, and when they started acquiring the two languages.

First up is a 2020 study of six to eleven year old twins from Hong Kong who were learning English as a language in school. The researchers were interested in answering this question: Does the twinning effect affect a home language and a second language vocabulary from middle to late childhood? (The twinning effect means a language delay compared to non-twin children and you can read all about it here.) They were also interested in the effect that competition for adult interaction and linguistic input at home might have on vocabulary in the second language. This study took place in Hong Kong where HK Chinese children usually learn most of their English vocabulary at school through direct instruction and in conversations with their teachers. Some exposure to English may happen at home but mostly they learn English at school. Learning English in Hong Kong starts at age 3 in kindergarten so by age 6 (which was the age of the younger participants in the study), children have had several years of formal teaching of English according to the researchers. (Of course your situation may well be different.)

352 children participated in the study. That group was made up of 176 girls having a twin brother or sister and 382 non-twin girls. Only one twin per pair was included in the study. They all went to the same primary schools in lower-middle & middle class neighbourhoods. In Hong Kong, over 90% of the population are ethnically Chinese and Cantonese is their language. The focus of the study was on vocabulary in the two languages. The twins and singletons were matched for their age, gender, the grade they were in at school, non-verbal intelligence, parental education, family income, number of siblings, and residents in the household.

According to the researchers, this is the first study of how twinning might affect the development of a second language.

These are the hypotheses (educated guesses) that the researchers were interested in testing:

The small twinning effect on English vocabulary is reduced even more when you take exposure to English at home into account.

So, what did they find? They found a clear twinning effect on Cantonese vocabulary knowledge at ages 6-11. The effect was seen in understanding vocabulary, naming or expressive vocabulary, and the ability to define what words mean. When it came to English vocabulary though the twinning effect was not as clear. The only significant twinning effect was found on expressive vocabulary. The effect on understanding English vocabulary was only marginal. And was not evident in the older children. The researchers also found that this twinning effect on the home language decreased as children got older and was weaker at age 8 years and 8 months. They put the twinning effect on the first language down to enhanced competition for parents’ attention. They came to that conclusion because the twinning effect was much less for the second language which was learned mainly at school and therefore much less affected by family interaction factors. And although the children learned most of their English at school, there was a relationship between their exposure to it at home, family socioeconomic status (measured by family income and education levels), and their English vocabulary knowledge. The same relationship was not found for Cantonese vocabulary which seems to suggest that English is learned more as an academic skill compared with Cantonese. But it’s not yet clear how exactly family socioeconomic factors may affect the acquisition of the second language in such a situation. Although when you think about it, it seems likely that where family education levels and incomes are relatively higher, then these families have more resources to spend; things like having more English themselves and confidence to speak it with their children or the ability to send children to schools with strong support for the second language.

As it turns out, Hong Kong is well-suited to research about language development in bilingual twins because Chinese and English are official languages and English is a compulsory subject in school as is Putonghua/Mandarin. Because English instruction begins relatively early at age 3, it’s possible to assess its development early on. Because of the status of compulsory English and Putonghua in primary school, it’s relatively easy to get a sample of twins that are very similar in terms of language education so like can be compared with like. And in a city with a population of about 7 million, there are 8 government-funded universities, one private university, and lots of researchers and schools willing to participate. Simpson W.L. Wong has been involved in a lot of pioneering twin research in Hong Kong, looking in particular at reading development.

What else did I find? Another study involving Simpson W.L. Wong from 2014 looking at the contributions of genes and environment on second language reading in children learning Chinese as their first language and English as their second. 279 Chinese twin pairs took part in this study. The average age of the children was six years. The language skills that the researchers were interested in were

A key question for the researchers was whether proficiency in the home/first language helps or hinders development of the second language. In their study, the two languages in question are very different. Their summary of other research suggests that the development of literacy is not hampered by the introduction of a second language. In fact, the research indicates that learning a second language and becoming literate in it may be made easier as children can detect similarities and differences between the languages. Meta-linguistic skills are important. That means knowing that languages differ in terms of their sounds, alphabets, sentence structure, where adjectives go, how you make plurals and so on. That’s a skill that starts to develop at around age five to six. The two languages support one another.

So what did Wong and colleagues find out? It’s complicated. I’m going to try

and keep it simple while staying true to what they found! They found:

What about when the languages are more closely related and both languages are being acquired simultaneously? I came across a book chapter about the acquisition of speech sounds in bilingual English-Spanish speaking twin boys. I include it here because David Ingram, the first author is a well-respected researcher in communication disorders. So the researchers collected language samples in both languages from the boys when they were 18, 19, and 20 months of age. The researchers were interested in whether or not twin children show early separation of their speech sound (phonological) systems in the same way as monolingual children. Remember the twinning effect on language development in twins? It turns out the twinning effect also happens in speech development. But a lot of the research about this is old (and focused on monolingual twins). For example, research has found that that twins are delayed in relation to non-twins in their speech acquisition and that identical twins are more similar in their speech development than non-identical twins. Barbara Dodd and colleagues in Australia in the nineties found that twin speech sound systems are not only delayed but also show disordered features. When Ingram and his colleagues wrote this chapter in 2011, there had been no studies that found identical speech sound acquisition in twins. Case studies had actually shown how non-alike twins can be in their speech development. In the study by Ingram and colleagues, Leo & Simon were the boys who were growing up in Spain with a native English speaking mother and a native Spanish speaking father. The parents each spoke their native language to the twins. (It doesn’t say what language they spoke to each other in). The boys were studied from 12 months to 6 years of age with speech and language samples (30 minutes) recorded every two to three weeks. Each time they were recorded, they were recorded separately in Spanish and in English. The researchers looked at things like sounds at the beginning and ends of words, the number of syllables in the boys’ words, the different consonants and vowels they were using at the different ages and so on. To cut a long story short, the results of all the detailed analyses found that Leo’s and Simon’s speech development was not identical. Three of the 18 measurements that the researchers used showed similarities of less than 90%. The similarities between the languages were lower than between the children. Leo’s English and Spanish phonologies were 73% similar, and Simon’s were 68% similar. The bottom line? The children’s speech sounds systems, while they were highly similar, they were not identical. The researchers concluded that being a twin did not hinder the separation of the languages. They concluded that the results of their detailed speech analysis did not support the idea of a twining effect on speech development. They concluded that early language separation was taking place despite a presumed genetic tendency for the children to be highly similar to each other. But only two children were involved in the study so they couldn’t come to conclusions about things like whether or not the identical twins were more .similar than non-identical twins or non-twin siblings.

In the final post in this series, I’m going to look at the idea of twins having a secret language and see what the research says.

Are you a parent of multilingual twins? Be sure and leave a comment below. I’d love to hear about your experiences!