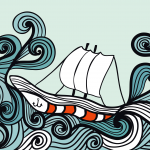 We’ve all done this I’m sure! I know I have definitely fallen into the habit of issuing threats recently. If you don’t tidy up your toys now, I’ll tidy them up and they’ll go in the bin… I mean am I really going to follow through with that?!! And is that the way I want to motivate my little girl? I know what will get her to tidy up- just tell her I can do it quicker and she’s off in a flash of tidying! But sometimes I forget that!

Or I’ve also heard myself say, If you hit me again there’ll be big trouble– what the hell does that even mean?!! And immediately after I have issued the threat, I never feel proud of myself. I feel like if that is what I’m reduced to then I’m not as resourceful as I thought I was!

Recently I came across two very useful ideas in relation to this kind of thing while reading Susan Stiffelman’s Parenting Without Power Struggles.

#1 Are you the Captain of your Ship?

She talks about the parent being in charge– not in a controlling or domineering way but that children need the adult to be in charge. Control is an attempt to compensate for feeling powerless or afraid. On the other hand, being in charge, means that we can keep our cool in the face of provocation. If your child wants to have a friend come to visit for instance, a Captain would say ‘I’m afraid today is not a good day for that’ And leave it at that. This is the hard part but if you can manage it, it feels great! She makes a wonderful point about how you can’t have a power struggle with only one person engaged and it’s true! I tried this recently when my little girl was having a very hard time accepting that she wanted to happen was not going to happen. I said something like ‘Not today sweetheart’ and while she raged against reality, I didn’t get into explanations like I usually would. I just focused on breathing and saying nothing for while. Then I remembered something else from the book where she talks about the words the child says not being the message. It’s all about the feelings. So rather than get into reasoning with her, I decided to just reflect back what she was feeling, saying things like:  it’s so frustrating when it doesn’t go your way, those are very big feelings, it’s such a pain, I know and so on. This all went on for about 20 minutes and I did feel like I needed a strong gin & tonic afterwards but I was SO pleased that I didn’t get stuck in to negotiating or reasoning with her. And what really surprised me was that when the storm had passed, she was so affectionate and it felt like our connection had been strengthened somehow. She says in the book that when we’re the steady Captain of the ship, our children can relax in the knowledge that we can be relied upon to help them through the stormy moments in their lives.

In the book, she also talked about the Captain of the ship scanning the horizon for potential storms; prevention being better than cure! So for example, if you know your child is hungry or tired and cranky after a day at school, you might give them a snack or let them run around for a bit before starting the homework. As the younger of two children, being Captain of the Ship does not come naturally to me- I’m used to someone else taking charge! So I have to consciously remember that it’s okay to be in charge; it’s actually necessary!

The other useful distinction she makes is between:

So if you’re the Captain of your ship, then threats won’t feature because threats are delivered when we feel angry or frustrated or out of control. They tend to be delivered as a last resort, out of desperation to get your child to do what you want. Like when I said If you don’t tidy up your toys now, I’ll tidy them up and they’ll go in the bin…

Consequences, on the other hand, are generally presented with compassion by a parent who is being Captain of their ship. They tend to be delivered in a tone of quiet authority. Calmly and to the point. No lecturing, sermonising or premonitions of doom! She gives the example: I know it’s not much fun to clean up your toys, sweetheart, but remember what we talked about? If you decide to leave them scattered all over the floor when it’s time to tidy up before bed, they’ll go into a bag for a week and you won’t have them to play with for a while. A clean consequence is the natural result of a choice the child has made. It’s based on the simple notion of cause and effect. She also suggests telling your child in advance what sort of thing will happen if they make a poor decision rather than making random consequences (i.e. punishments) up on the spot in the heat of the moment. Again, prevention being better than cure.

So I’d love to hear your favourite threats in the comments! The challenge for this week is to convert your favourite threat into a consequence, talked about with your child in advance of any trouble! Be sure and let me know how you get on in the comments below. One final word from Susan Stiffleman- she quotes the Dalai Lama on parenting: When I look at the parenting experience, I sometimes wonder, if I were a parent, would I have that kind of patience?’  So when you find yourself issuing another threat, think of the Dalai Lama and give yourself a break!