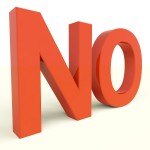 Okay, confession time! I have great trouble saying ‘No‘. My default reaction seems to be to say ‘Yes‘ to practically everything! For instance, my little girl might want me to play Three Little Pigs with her and even when I really don’t want to, I find myself sighing internally and saying ‘Okay’ but then only playing it half-heartedly and feeling guilty for not being more enthusiastic! Over Christmas, I did a 30 day wealth make over challenge. One of the tasks was to say ‘No’ to everything over the next two days. Now not things that would result in you losing your job or endangering anyone! The whole idea was to consciously say ‘Yes‘ to what you really wanted and ‘No’ to what you didn’t. Oh how I squirmed at the very idea of it! But not giving it a go wasn’t an option either so I got stuck in!

So like with any new skill, I was fairly clumsy at first and botched my first attempt. My little girl came to me with some writing she had done. ‘Want to see my writing mama?’ she asked. ‘No,’ I said and immediately felt so guilty as her little face sank in disappointment. So I changed my mind and said ‘Okay. I’ll have a look’. Hmm. Did I really want to look? Yes, for sure.

Next try was more successful maybe because I thought about it first before saying ‘No‘ and I did really mean it. I was going to make orange juice. My little girl wanted me to make smoothies and I really did not have smoothies in me! So I said in a very neutral tone, ‘No, I’m not making smoothies today’ and then I held my breath! It felt so alien to me to not give her what she wanted even if it meant denying my own feelings. There was a brief protest and I just said ‘Mmm. You really want smoothies. I’m not making smoothies today’ – holding my breath again! The moment passed, I made the orange juice, she drank it, two glasses even, and you know what? The world did not end because I said ‘No‘!

Then came ‘I want a Peppa Pig magazine’ and my reply: ‘Not today. That’s not how I want to spend my money today’. Mild protest and then we moved on to something else. I began to really enjoy it! As for the Three Little Pigs re-enactment, now I do it if I really want to but if want a cup of tea first, I just say ‘Not right now. I’m having a cup of tea first and then I’d be delighted to play it. Who will I be?’ She herself is very good at saying ‘No’ when she doesn’t want to so I am taking lesson from her while learning to say ‘No’ more gracefully each time!

Try saying ‘No’ for an afternoon- doesn’t have to be with your child although it might be easier to start with them!  If ‘No’ feels too blunt for you,  depending on the situation, you could try ‘Not right now’ or  ‘No, thank you’ or ‘Thank you so much for the offer but it doesn’t suit right now’. Keep your tone neutral and polite! Be sure to  leave a comment and let me know how you get on.