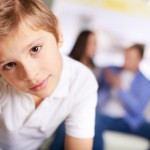 So this week’s post is about stuttering and multilingual children. The question came from Maria whose 5 year old son speaks Spanish and English at home and has been learning German at kindergarten for 2 years. She noticed that he had started to stutter when he spoke very quickly to her in Spanish and in English. She wondered if it was normal for children to stutter when learning a 3rd language.

This is a tricky question as stuttering is a complex problem to understand and treat in general. And for bilingual and trilingual families, the research is very limited and it’s hard to find definite answers. The role of bilingualism as a potential risk factor continues to be debated. However, The Stuttering Foundation (a U.S. based not-for-profit organisation) says that no evidence has been found to suggest that speaking two languages in the home since birth causes stuttering. Colin Baker says the same thing. The Stuttering Foundation also says that there is no indication that teaching your child a third (or 4th etc.) language causes stuttering. Additional languages are often introduced around age four, which can be a critical age for both language-learning and stuttering. Now they also say that if you notice that your child’s language isn’t developing as expected or you notice the beginning signs of stuttering, you do need to see a speech and language therapist. They mention holding off on the introduction of an additional language in these cases until after age 6. However, in Maria’s situation, her little boy requires 3 languages to communicate.

Many children (up to 5% of all children) stutter. Colin Baker reports a study of 800 people (with 52 native languages) which found that there was no difference in monolingual or bilingual speakers in the chances of experiencing stuttering. People who are bilingual are just as likely to stutter as monolingual people. And bilingual people who stutter tend to stutter in all of their languages although stuttering may happen a little more in the less developed language.

Developmental stuttering or normal non-fluency as it is also called generally tends to occur most often between age 1½ and 5 (or 2 and 4 years depending on where you read). It often coincides with a period of rapid expansion of speech and language skills. It tends to be gradual in onset but where the onset is sudden, it is more likely to be severe. And when stuttering first emerges, the ratio of boys to girls tends to be equal. By the time they start school the ratio is 3 boys to every 1 girl.

According to Barry Guitar and Edward Conture (experts in stuttering), the normally disfluent child occasionally repeats syllables or whole words once or twice, li-li-like this. Disfluencies may also include hesitancies and the use of fillers such as “uh“, “er“, “um“. These kinds of dysfluencies tend to come and go and are usually signs that the child is learning to use language in new ways. They may disappear for several weeks and then come back again. If this is the pattern, then it might be that the child is just going through another stage of language learning. There is considerable variability and unpredictability in early stuttering.

For bilingual children, as their competence in the languages increases stuttering usually disappears. Using the Stuttering Foundation‘s risk factor checklist (http://www.stutteringhelp.org/risk-factors), elevated risk factors in Maria’s situation would include that the stuttering started relatively late (after age 3 ½) and that he is a boy. On the other hand, approximately 75% of 4 year old children who stutter do grow out of it.

Although Spanish speakers tend to say more syllables per second than other language speakers giving an impression of speed, the rate of information conveyed tends to be relatively stable across languages.

So in the face of all this mixed information, what should you do? I think it’s a good idea to consult a speech and language therapist who specialises in stuttering. And while waiting for an appointment, here are 5 practical ideas that will help.

I talked with Patricia Collins, a speech and language therapy colleague of mine who specializes in working with people who stutter and she suggested the interject & reflect idea. So for example, let’s say Maria’s little boy is telling her a story very quickly, she can find a naturally occurring place to interject and comment e.g. Really? How interesting! I love listening to your stories or I love the way you tell me stories.

She could model a natural, slow and relaxed rate of speech herself which creates a context for relaxed communication. She can model pausing before she speaks (Try counting to 3 in your head before responding).

# 2 Respond to the message not the speech
It’s also useful to respond to the content of what her little boy is trying to tell her as opposed to the form it takes. This is important because showing anxiety to the child isn’t helpful. My own little girl started stuttering at 2 ½ and I worked very hard to slow my own rate and cut out questions. After a lot of reflection, I realised that I was the only one who was anxious about it. I realised also that I had anxiety that was just looking for a home and it happened to be her speech!

#3 Reduce questions
I’ve already written about this here http://talknua.com/killer-questions/ and here http://talknua.com/pop-the-question/
It’s really good to reduce the number of questions and use statements instead and leave space for the child to start the conversation if they wish. And if you ask a question, wait for your child to answer before asking another one.

#4 Giving advice
It’s not helpful to tell your child to slow down, take their time, start again, take a deep breath and so on- the kinds of advice we might instinctively give. Questions to ask yourself might be:
• Can I think of other ways, apart from telling him, that would help him calm down?
• Can I think of ways to help him not tire himself out and get more rest?
• How could I help him keeps things fairly simple so that he is less likely to stutter? I realised that I was using very complex language with my little girl and had fallen into the habit of expanding everything she said to make it more complex! Then I had to work at actually saying less and keeping my own contributions short and simple.

Hope this helps! If you like this post, please pass it on to your friends. And please leave a comment below to let me know how you get on.

Inspired by:
Multilingual Aspects of Fluency Disorders (2011) edited by Howell and van Borsell.

Colin Baker’s A Parents’ and Teachers’ Guide to Bilingualism.