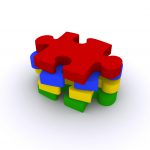 #1 Language skills tend to be distributed across languages and vary over time. This means that it’s natural for multilingual children to know some words in only one of their languages. It’s not a case of two or three monolingual speakers of each language in the one child. A simple example is where they have words to do with home, family, and community in the language used there and then they learn words to do with maths and science and geography and so on at school. It’s important to know this because it means that you need to think about all of the words your child has in all of their languages. And it means that if they’re seeing a speech and language therapist, they need to have all of their languages tested. When their language is tested, it’s not unusual for multilingual children to do better on some tasks than on others. So, they might be good with vocabulary and story-telling in the home language and not so good at these in the community language, especially when they’ve just started school. That’s just the way it goes and it doesn’t mean your child has a language problem.

# 2 The languages interact with each other. Basically, the languages do seem to be stored separately in multilingual children’s brains, but they interact with each other. Multilingual people tend to mix languages and switch between them to different degrees. Children aren’t confused when they mix. You can only mix things that are separate to begin with and if you look closely, the mixed things they say are grammatically correct. For example, my little girl who has been immersed in Irish for about 5 hours daily since she was 4 was writing sentences that mixed Irish and English until this year. So she wrote Tá mé ag wearing sciorta in Irish. It’s I am wearing a skirt in English. It should be Tá mé ag caitheamh sciorta. She had the correct Irish grammatical structure, didn’t have the verb in Irish and so she popped in the English version in the correct place in the sentence. Not a sign of a problem- it’s a neat solution to the problem. She’s doing it less now. But what’s going on now is that she’s using Irish words with an English sentence structure. So Mercury is the planet next to the sun should be Is é Mearcair an phláinéad in aice leis an ghrian. But she wrote Tá Mearcair an phláinéad in aice leis an ghrian which is closer to English grammar. So when your child does this mixing , it might just be that they didn’t have the word they wanted in one language, so they popped in the equivalent word from another language- pretty cool when you think about it.

#3 Every one’s different and every multilingual situation is unique. In the research, even when children are matched closely in groups, there’s a lot of variation between individual children in the group and how they perform on language testing. And there’s also a lot of variation between groups of carefully matched multilingual children who speak the same languages. That’s because there are a range of factors that affect language development which are unique for every family. Things like the number of languages spoken, the ages at which children are exposed to the different languages, the opportunities they have to use the languages, their own motivation which can change over time, how similar or different the languages are, the social value attached to the languages and so on. Assessment of multilingual children’s speech & language skills need to take these three factors into account. Here’s an example of the kind of variation I mean: a boy’s expressive vocabulary can vary from 79 words to 511 words at 24 months of age and still be considered within normal limits! So, when looking at the research it’s important to remember that what’s true for the group may not be true for your child.

What about you? How does this fit with your situation? Let me know in the comments below.

If you’d like to read the article in full, I’ve put the reference at the end of the post.

PS this is an extract from the book I’m writing for multilingual families. If you’re not on my list already, be sure to sign up so you’ll know when it’s ready. You can sign up at the top of the page, near the title of the post.