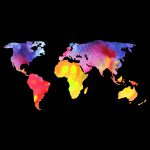 So my last post was all about speech development and delay in general. How to know if your child might have one and what to do about it. You can read that post here: http://talknua.com/would-you-know-if-your-child-had-a-speech-problem/

This week’s post is about children who speak more than one language and speech development. Oh my God, reading the research nearly wrecked my head! One word comes to mind: complex….actually other ones came to mind too when I was wading through the studies- most of the words too rude to put here!

So what’s the story then? Well, the research has tended to compare multilingual children with children who speak one language. Which is like comparing apples and oranges instead of comparing apples with apples. Not particularly meaningful. But that’s what’s out there.  What did they find? I’ve done my best to keep it simple but all the same, fasten your seatbelts!

What else? This stuff is SO confusing to read.  It’s a bit like the story of the blind men and the elephant. But here are 6 definites.

7 truths about speech development & speaking more than one language

#1 speech development is complex whether you speak 1 language or 4. It starts while your baby is still inside you; hearing the intonation patterns of the languages around them- I love that! And there are lots of ingredients that go into learning to speak. More of that later.

#2 Where children are acquiring multiple languages (which is actually the global norm) the languages interact with each other which leads to variation in their speech development and makes it hard to have definite facts.

#3 These interactions mean that there can be positive and negative transfer across languages.

#4 So what’s the bottom line? Multilingual children seem to have overall speech development that is similar but not identical to monolingual children.

#5 Over the long term, when children have lots of quality opportunities to hear and use all of their languages, their speech sound development will match monolingual peers.

#6 There are clear differences between languages when it comes to their influence on speech sound development. What makes things more complex is that the options for the combinations of languages in families is huge given the potential number of languages in the world and the potential family make-ups. Variety is the order of the day which makes generalisations hard to make from the research. That’s not necessarily a bad thing because it means that the individuality of each child’s family structure and language patterns must be taken into account.

#7 Speech sound skills are not the same in each language. They tend to be spread differently across the languages. This is because the rules of languages are different. What does that mean? Well in Italian, words with many syllables are common. They’re less common in English. Consonants at the ends of words are more common in English. Not so common in Italian. I once assessed a little boy who spoke Italian and English and words like helicopter, crocodile, hippopotamus were much better in his English pronunciation than I would have expected for his age thanks to the Italian influence.

I also read a paper that reviewed 66 studies carried out over the last 50 years. Basically, what they say is that there is limited evidence to suggest that bilingual children develop speech at a slower or faster rate than monolingual children. There was evidence for more variation in the speech production of the bilingual children. Nearly all studies show evidence of transfer but the amount varies. It’s accepted that there are 2 systems interacting when the child is acquiring 2 languages.

How does speech development happen? There are 3 processes involved with different skills needed for each stage.

For input, your child has to be able to hear a sound and recognise that it is a speech sound in your language as opposed to an environmental sound like the tap dripping.

Think about a new word you learned recently. Our favourite one for teaching the SLT students is cryptosporidium– a nasty little parasite in Galway water that gave us the runs. When it was on the news first, I couldn’t say it because I hadn’t stored the sound sequence. I knew the meaning but not the sounds. It takes practice to set down the right sequence and then I could say it no problem. And later I could spell it. That’s how word learning goes.

Output or production means their brains have to plan & execute the saying of the word accurately. They are little geniuses when you think about what has to happen for speech to develop!

Each of these skills is important for acquiring a competent speech sound system. This all takes from birth up to about age 6 +. After age 6 there are still some things to refine like intonation and stress in words like photography and for English speakers, the /r/ sound.

So what does all this mean for you and your child?

#1 Speaking more than one language does not cause speech problems. This is universally agreed upon in the research and by professional bodies like the American Speech-language & Hearing Association (ASHA), the Royal college of Speech & Language Therapists (RCSLT) etc. (This doesn’t mean you won’t be told to drop a language. If you are told to drop a language, ignore them and read this instead: http://talknua.com/what-to-say-when-the-doctor-gets-it-wrong/

#2 There is greater variation in the speech development of children who are learning more than one language. This can make the precise identification of a problem a little harder to work out. What you can do about that is when you go to see a speech and language pathologist, have a clear description of:

# 3 It’s reasonable to allow a greater range of normal variation in the bilingual children and allow more time for speech milestones to be reached. For any child, when you look at ages at which they should be doing things, it’s always important to remember that these are rough guidelines and not written in stone. At the same time though, you should see your child making progress i.e. speech gradually getting clearer. It’s important to identify children with speech sound disorders sooner rather than later.

If you do go to see a speech and language pathologist, here are 2 things to bring along with you to your visit:

#1 This form which comes in lots of different languages. It’s a report of how easy or hard it is to understand your child. And it’s a great starting point for exploring potential speech problems.

#2 This speech checker is for English but it will allow you to get a sense of what sounds your child is using at the start, in the middle, and at the end of words. http://www.speechchecker.com/

#3 If you do the speech checker for English, listen to your child speaking the other languages and make a note of what speech sounds you’re hearing. And write down examples of some words and how your child is saying them, especially if they are not saying them ‘correctly’ by adult standards. It doesn’t have to be precise, just a 1st attempt at mapping out their speech sounds.

Where is all this from? Here’s what I read: