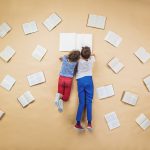 How many words should your child know and at what ages? This is a bit like asking how long is a piece of string? Although people have been researching this area for decades, it’s still hard to find clear answers because no study is perfect and they tend to approach the topic in different ways using different methods. Let’s have a look at some ballpark figures though:

Children of professional parents, girls, and children whose parents tend to use an encouraging style of interaction (as opposed to giving lots of commands for example) tend to have bigger expressive vocabularies. Children who had a very low birth weight or where their mothers had health problems have been found to have smaller vocabularies. One study from the 1980s found that children of professional parents would have experienced 42 million words by the time they were 4 years old! Imagine!! Their children were hearing on average 2153 words an hour. That study also found that between 86-98% of children’s vocabularies at age 3 came from their parents’ vocabularies. (Swear words any one?!!)

What if your child is learning two languages or more?

There’s a lot of variation in the research and there are lots of studies that report smaller vocabularies for multilingual children. One study which looked at vocabulary in 1738 children between age 3 and 10 in the US found that that although the bilingual children had smaller vocabularies in both languages, the difference had to do with vocabulary associated with home environments. This isn’t an indication of a problem. Of course there was an imbalance because we use language differently according to the situation we’re using it in.  When it came to vocabulary for school, the monolingual and bilingual children were more comparable. This means that bilingual children are not at disadvantage when it came to academic performance, learning to read and write, and using spoken language for school related topics.  There’s a lovely line at the end of that paper by Ellen Bialystock and her colleagues: Bilingual children are constructing the world through two telescopes, and their two vocabularies provide the lenses.

There are several influencing factors on language development like I mentioned above. One recent study in Canada set out to control for many of these factors such as socioeconomic status, the statuses of the languages, the amount of exposure and so on. That study found a strong and systematic relationship between vocabulary development and the amount of exposure to the languages in the 5 year old children who participated. There was a clear relationship between expressive vocabulary (looking at pictures and naming them) and the amount of exposure: more exposure led to higher scores. When it came to comprehension, it wasn’t so clear. They found that once exposure hit 40-60% in either French or English, increasing exposure didn’t lead to higher scores.

So what can you do to build your child’s vocabulary?

The good news is there are lots of natural, simple ways to do this and I’ll show you how in my next post.