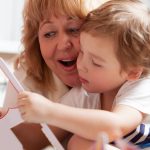 We all eagerly await the day our child says their first word. It’s so exciting! Looking back, the first word my little girl understood was kiss. And her first word was /k/. But ‘That’s not a word!’ you say. Oh but it is in this context as she always used to it to request Katy Perry’s Firework song to be played on the computer. A word is the same sequence of sounds used to refer to the same thing each time. After that came kiss and tickle.  Tells you a lot about what was happening in her world! So first words are expected to come any time from 8- 15 months depending on what you read. (Or even 18 months according to one source I looked at) There’s a lot of individual variation among children in their language development which makes it hard to work out what’s in the range of typical development and what’s not. (If you’re worried that your child is late to talk, read here and here.).

Individual variation in language development is also a key feature if your child is learning 2 languages or more because each family situation is unique in terms of the languages spoken, the amount of exposure to each language that your child receives, the opportunities to use the languages that they have, and the relationship between the languages like Spanish and Italian vs Spanish and Mandarin for instance.

But first words are only a stepping stone in language development. Now, don’t get me wrong, they’re a very important step on the way to developing longer and more complex utterances and sentences. What comes next is important too.

So what happens next? Word combinations is what. Now, things like all gone and thank you are not considered true word combinations because they’re most likely learned as one chunk by your child. The fancy name for them is holophrases. They communicate one single intention like requesting, rejecting, labelling, greeting. Language is used to communicate something and these communicative intentions are important because they show that your child is learning to use language to do something like asking for more tickles or rejecting food that they don’t like. These early combinations are really cool and tend to allow our children to communicate in three useful ways: # 1 making statements about things that interest them, # 2 giving orders (!!) , and # 3 asking questions. Here are some examples:

You do it (order)

Here you are (statement)

Where the bottle (question)

About 11% of our toddler’s language is thought to be made up of holophrases. Thank you is not a true 2 word combination if your child can’t use thank and you in other utterances such as you go or thank me and so on.

At about 18 months then, children begin to combine separate words into meaningful utterances. There are three types of these.

# 2 Pivot schemas where it’s like there are two slots- the pivot word which stays the same and the other slot that can be filled with a range of words depending on what they want to communicate. Isn’t that amazing?! The order of the pivot word + the other slot tends to be fixed. The order of the words tends to mirror the order that your child is hearing in their everyday environment. Common ones are like this:

other + : other bib, other bread, other milk, other pocket, other shirt, other shoe

# 3 True two word combinations which express two separate ideas. These are really cool too as they’re predictable in the sense of the kinds of meanings they can express. Here are some examples of the range of meanings that our clever infants can communicate about as they discover their world:

Our children are expected be combining two words together by 24 months of age with about 50% of their utterances expected to be made up of two word combinations at this age.  Before being able to combine words, your child needs to have a diverse vocabulary. That means nouns, verbs, prepositions, and adjectives. A recent study found that children who were described as being late word combiners (not combining words at 24 months) were found to be more at risk for future language problems than children who were slow to produce their 1st words (late word producers- not producing single words by 15 months).

How will you know when your child is ready to start combining words?

# 1 When you notice that their vocabulary includes  different kinds of words like I mentioned above. Nouns (car, house doggie), verbs (eat, sit, walk, crawl, smile, laugh), adjectives (hot, cold, bad, sore), and prepositions ().in on under). Once they have a wider range of vocabulary than just nouns, they have the foundations they need to start combining them.

# 2 When they use Gestures and Words

This is another cool thing about our infants! Before they can put two words together, they usually use one word plus a gesture which adds extra information so that they can get their message across. (If you want to read more about baby sign which is different from natural gestures, you can read all about it here.). So if your child points to the packet of biscuits on the kitchen counter and says Mama, she’s expressed two ideas. # 1 Agent Mummy and # 2 Action- give me a biscuit! Your child pointing to the biscuit while saying biscuit only expresses one idea. So does lifting their arms up to you saying Up– one idea. But lifting arms up and saying Mama is two ideas: Agent Mama+ Action Lift me up.

So what can you do to help things along? Here are four of the most supportive things you can do when playing with your child to encourage them to start combining words:

# 1 Observe what your child is interested in and comment on what they are looking at. This means you’ll have to resist the urge to point something out to them that you think is interesting. So let’s say they’re looking at a cat out the window. They might point and say Cat. You then say Oh, I see a cat or The cat’s in the garden. It’s important to keep your sentences grammatical too. Keep them short and simple but full sentences. Do your best to avoid trying to teach them overtly by drawing their attention to something else- this isn’t an effective way to teach them. Following their lead is more helpful.

# 2 Abandon all attempts to get your child to repeat what you want them to say! It’s not communicative and is a form of pressure to perform. Interactions with your child need to be meaningful to them and having them repeat things isn’t a genuine communication exchange. Bite your lip! I know it’s hard especially when they’re so cute but it’s worth it in the long run!

# 3 Make sure you use a range of different words other than just the names of things when you’re playing with your child. So talk about how the dog is spotty or brown or big or small or under the bed and so on.

# 4 Say it the way they would if they could. This comes back to #1 above. It’s best to use short grammatical sentences and not things like doggie bark for instance. So if  your child says doggie bark, then you can say The doggie is barking or Doggies bark which are short, expanding on your child’s effort, and still grammatical.

What two word combinations did your child use? What one’s are they beginning to use? Be sure to leave a comment below.

If you like this post, please pass it on to your friends. And if you haven’t signed up already, be sure to sign up to get the posts straight to your inbox.

Hanen’s It Takes Two to Talk.