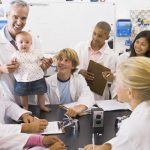 Recently I wrote a blog post for Bilingual Kidspot about children who are considered to be late talkers. If you want to find out what exactly does it mean to be a Late Talker, you can find out here. In this post, I’m talking about language. That means when your child says her first words, starts putting words together to make sentences, tell stories, and so on. That’s different from speech sounds and children’s pronunciation. (If you’re worried that your child may have delayed speech, read these 2 posts here and here.

This post is all about what happens to children who have been identified as being Late Talkers or having an expressive language delay. Do they catch up? How long does it take? I had a look to see what does the research say. Most of the research is on monolingual children and it’s hard to find recent studies. It’s also very hard to find anything about multilingual children. And different studies define and measure things differently so it’s complex! You can see the list of what I read at the end of the post. I’ve extracted what I think is the most useful information for you but I’m aware that it’s not the whole picture. This is a very nuanced topic!

A delay in expressive language is one of the most common reasons that young children are referred for language assessment. Between 10-20% of 2 year olds are affected by late language emergence. There’s a range of small scale and longitudinal studies which indicate that most late talkers do achieve average range language scores on language tests by age 5, 6, or 7 years. So overall the prognosis for late talkers is good. That means, most children who are late talkers do go on to have language skills in the average range. (There is a but here- keep reading to find out what it is. Actually there are several buts as it turns out!)

For preschool children, a summary of research on small scale, longitudinal studies of outcomes for late talkers shows that most children scored in the normal range on language tests by age 4 or 5. Delays in grammar tend to linger for longer than delays in vocabulary. Significant predictors of outcome, (which did vary across studies) included receptive language (that’s understanding of language), gestures/play skills, the degree of delay at 2 years, the range of consonants used by the child, a family history of reading problems, and word learning.

What about school aged children? Again, small scale longitudinal studies of school-age outcomes for late talkers indicate that most late talkers scored in the normal range by age 6 or 7 but continued to have significantly weaker language skills than typically developing peers through to adolescence. So as a group, late talkers are at heightened risk for language or learning issues. Significant predictors of outcome, (which again, varied across studies), included vocabulary at age 2, nonverbal IQ, and preschool expressive and receptive language.

I’m extracting the main points here as studies vary a lot in terms of the numbers of children involved, the age of diagnosis, what they measure and how they measure it. Leslie Rescorla, who is a much-published researcher in the areas says that a robust finding across many studies is that most late talkers attained language scores in the average range by age 5 or 6 or 7. In addition, most late talkers in primary school score in the average range even on tasks that appear to be the most challenging for them like grammar and verbal memory measures.

Another very robust finding reported by Rescorla is that late talker groups consistently attained significantly lower scores on most language measures than groups with histories of typical language development. BUT their scores for oral language, reading and writing are still in the average range. So while the scores are lower, they’re not always statistically or clinically significant. She suggests a spectrum of language skills deriving from variation in many discrete skills. So it’s like language ability exists along a continuum. What are these skills though? Things like auditory perception or processing, word retrieval, verbal working memory, motor planning, discriminating between speech sounds, and grammatical rule learning. (Complex!)

So at age 6-9 she found that late talkers did not have lower reading scores than comparison peers at ages 6 &7 when they were all in the early stages of learning to read. On the other hand, she found that late talkers did have significantly poorer reading/spelling skills at ages 8 & 9 than their comparison peers, as reading skills became more established in both groups. But their scores were still in the average range. She also found that expressive vocabulary as reported by parents of toddlers (aged 24-31 months) on a checklist that took 10 minutes to administer was significantly associated with school-age language skills at age 6-9 years. Meaning that children identified by the questionnaire as late talkers versus typically developing children, all of whom had normal receptive language and nonverbal ability, differed significantly on language and reading measures at ages 6 to 9. And that expressive vocabulary at age 2 is an excellent measure of general language ability at that age. For late talkers with normal receptive language, this weak language ability shows up later, not in clinical impairment but in slightly poorer language performance than would be expected given their socio-economic status and nonverbal abilities. It also means that vocabulary skills at 2 to 3 years  of age may be a better index of underlying language ability for late talkers than grammatical skills measured in the preschool period, when most late talkers are catching up to comparison peers.

What else does this mean? Rescorla says that it means that you can be confident that most late talkers with normal receptive language skills will perform in the average range by national standards in most language skills by the time they go to school. (Her work is based in America) In addition, you can anticipate that relatively few late talkers will develop problems with reading. On the other hand, she says it’s  important to know that early expressive language delay may indicate some subclinical weakness in the skills that serve language development and learning to read. She suggests then that it might be a good idea to give late talkers, even those with normal receptive language skills, with extra exposure to games and activities that may help to strengthen vocabulary development, verbal memory, awareness of sounds and letters and so on.

What happens at age 13? Once again, all the participants in her study who had been late talkers performed in the average range on all standardized language and reading tasks at age 13. But they scored significantly lower than socio-economically matched peers on combined measures of vocabulary, grammar, verbal memory, and reading comprehension. They were similar to their comparison peers in terms of reading and writing mechanics.  Again the age 2 vocabulary score from the parent checklist was a significant predictor of age 13 vocabulary, grammar, verbal memory, and reading comprehension. She says that her findings suggest that slow language development at age 2–2 ½ is associated with a weakness in language-related skills into adolescence relative to typically developing peers. And she recommends boosting your late talking child’s language abilities with games and activities as that might well help to prevent future language weaknesses relative to typically developing children from the same backgrounds.

And finally what happens at age 17? Rescorla again found that although the late talkers continued to be comparable with comparison children on nonverbal tasks, their scores on most of the language measures at age 17 were lower than those of the comparison children, despite being in the average range. So children identified with delayed expressive language as toddlers generally scored in the average range at age 17 years and didn’t have significant language impairments. According to the teenagers themselves and their parent, they were all making good progress in high school and were on track to graduate. But, they continued to have weaker language skills at age 17 years than peers with typical language histories—a finding that is consistent across a range of studies.

It’s important to remember that late talking is a characteristic not a disorder in itself. And the most likely outcome for individual late talkers is that they will catch up to their peers with typical development. How much a toddler understands may be a better predictor of expressive language outcome than how much he or she says. Children with better comprehension have a better prognosis for language development. Late talkers are at relatively low risk for language or learning disorders. Being a late talker does not mean a language disorder is in your child’s future.

If you like this post, please pass it on to your friends. If you’d like even more resources to build all of your child’s languages while still having fun, visit the Talk Nua shop here.

And if you haven’t already, be sure to sign up for email updates into  your inbox.

Fisher, E. (2017). A systematic review and meta-analysis of predictors of expressive language outcomes among late talkers. Journal of Speech, Language, and Hearing Research 60: 2935-2948.