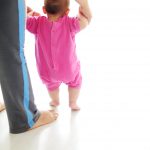 Welcome to the 3rd (and final) post in our series for parents of children who were adopted internationally. In our first two posts, we covered what the research says about language development for your child (read it here.) and what questions to ask about your child’s early development before you bring them home (read it here). In this post, we’re going to give you 7 top tips for how to best develop your child’s new language when they come home. We’ll look at the question of multilingualism for children who were adopted internationally. And we’ll look at their mother tongue too.

If you know you’ll be getting to meet your child a couple of times before she comes home, you can make a picture/photo album to leave with her. This way, she can become familiar with you and where she’ll be living and other family members like grandparents. You can have great interactions with the book; looking at the pictures and commenting on them using simple language and lots of pointing. Another option here are those books where you can record a message to go along with each picture so she’ll be able to hear your voice while you are away. (Tomy Discovery Forget Me Knot Photo Album is the one we had at home). You can also use the book for conversations once they are home.

The information which you collected about your child’s language skills, her likes and dislikes, how she currently communicates etc., will help you feel confident when communicating with her. And as you get to know each other you’ll become more tuned into her style of communicating. The Hanen Centre in Canada have a handy tip called OWL. It stands for Observe, Wait, and Listen. This means that you pay close attention to your child in terms of what they’re looking at. What are they doing? If you say something in response to her, how does she respond? The Wait bit is important for her to take her turn. So you say something or do something while playing like put another brick on the tower. Then you wait to see what she does in her turn. Then you take your turn. The Listen bit then is where you pay close attention to the sounds she makes or the words she says and you say what you think she’s trying to say. You can find more great resources from Hanen here.

When your child comes home, she will be learning to adapt to many different things: a new home, new climate, new people, new culture, new routines etc. She’ll also being forming an attachment with you as her parents. In Bríd’s research, she interviewed parents whose children were toddlers when they came home so they had their mother tongue and were then immersed in English. Many of the parents she spoke with felt that communication and interaction occurred naturally in spite of the language barrier early on. At that age it’s often fairly obvious what your child may be trying to communicate. You can pay particular attention to what they’re looking at and what they’re reaching for or pointing to for clues.

# 4 Songs and nursery rhymes in your child’s mother tongue

Many parents in Bríd’s research found it helpful to buy a CD of nursery rhymes or songs in their child’s mother tongue.  They found that they often soothed children during times of upset in the early days after coming home.

#5 Learn some basic vocabulary in your child’s mother tongue

Other parents learned a couple of basic words from their child’s native language e.g. hello, bye-bye, words relating to their child’s regular routine e.g. bed, bath, food, drink, nappy etc. Being able to hear to her native language will act as a means of continuity and familiarity during the transition period.

Only have a small number of toys around to start off with. Get down to her level physically and encourage turn taking in simple games like building and knocking a tower of bricks. (These are going to depend on your child’s age and level of interest)

# 7 Use gestures and facial expression as well as words

You want to give as many clues as possible to help your child understand what you mean so you can pointing to objects that you’re talking about, use animated facial expressions, varied tone of voice etc. Use natural gestures for things like sleepy/tired, hungry, no, yes and so on.

Can your child become multilingual?

There’s very little research when it comes to this question but if we look at research on language development in children in general, we know that speaking two languages or more does not cause speech and language problems. And that children who have autism or who have Down Syndrome, for example, can and do become multilingual. (It’s important to remember that when we’re talking about language development, we need to think of listening, speaking, reading, and writing. Multilingual children’s abilities will naturally vary in each of their languages for each of these skills.) If your child was adopted internationally and now needs two or more languages in their new home environment, then the need is the important thing. And there’s no reason why they couldn’t learn two languages or more with high quality input and lots of opportunities to use their languages.

What about their mother tongue?

Children who were adopted internationally tend to make rapid gains in their new language in the early post-adoption period. Their mother tongue loses it significance as it’s not the language of their everyday lives any more. A recent Canadian study involved children who had been adopted from China at over 12 months of age and had not been exposed to their mother tongue for over 12 years. MRI scans showed that their brains had actually retained some representations of their mother tongue in spite of the lack of exposure.

Maintaining links with your child’s birth culture and language is a personal choice. In relation to language, your child’s perceived need for the language and her motivation will exert powerful influences on her development of that language. There’s no easy answer here. It does depend on your personal circumstances and choices. You have to do what works for you and your family. Here’s one woman’s account of her experiences of trying to maintain links to her child’s language and culture.

We hope this series has been helpful. Bríd would like to thank Mary-Pat for asking her to contribute to the blog! Delighted to work together Bríd!