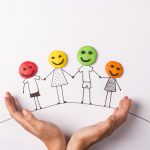 If you’re a parent of a child with Down syndrome and you’re raising your child using two languages or more, it’s possible that somewhere along the way, you’ve been told to drop one of  language. After all, children with Down syndrome struggle with language development so wouldn’t it be easier to focus on just one language only? This is simply not true. “Common sense” is wrong in this case. The research tells us that health care professionals should support you in raising your child who has Down syndrome as a multilingual child. In fact, dropping a language can actually make things worse. It can end up limiting your child’s participation in a range of situations. It can negatively affect their social, emotional, and educational progress.

So what does the research actually tell us? Now, compared with topics like being a late talker or having developmental language disorders, there isn’t a lot of research involving multilingual children with Down syndrome. But here’s what I found from 1993 – 2016. More research definitely needs to be done. Many of the studies only involve small numbers of participants. And what’s true for someone in a study may not be true for your situation. And all research has limitations. Bearing all that in mind, let’s have a look at what’s out there.

One study in 1993 involved a 23 year old Italian woman with Down syndrome who had been exposed to English, French, and Italian since childhood. When her languages were tested, she was able to have conversations in all three languages and understand English television shows. Her French abilities were weaker because it was the language she spoke least often. Nothing to do with having Down syndrome then- that would be the same pattern for any multilingual person.

Another study involved twins with Down syndrome who were born to deaf parents. They learned both English and British Sign Language to the point where they could communicate effectively in both. Yes, they showed impairments in both languages compared with monolingual children but that’s not that surprising. They also showed a preference for English even though BSL was the home language. But most multilingual children show preferences for their different languages at different times and in different settings.

A 2008 Canadian study of vocabulary and grammar in children aged between 5 and 8 years old found that the bilingual children with Down syndrome did show language delays in both languages but bilingualism was not the cause of these delays. Children who have Down syndrome do struggle with language development affecting expressive language in particular. However, being bilingual does not make these language problems worse. All of the four children with Down syndrome in the study were developing functional second language skills. Just like any child, the variations in their vocabulary was related to the input they were receiving in each language. (English and French were the languages)

Next, from the UK, a case study of one girl aged 6 years 11 months when the study started and 9 and a ½ when the study ended. She was born in Belarus to multilingual parents who spoke Russian, English, and Belarusian. She moved to the UK when she was 6 months old. Russian was her home language with limited exposure to English until she started school at age 4 and became more exposed to English. Her parents read to her in Russian daily and extensively and started to teach her to read words in Russian when she was 30 months old. In this study they wanted to look at her speaking and word level reading. They showed that when it came to spoken language, the little girl was as proficient in Russian as she was in English with slightly stronger word reading ability in English. Similar to monolingual children with Down syndrome, this little girl did struggle with aspects of reading such as understanding what she was reading. In fact, when it came to understanding what she was reading, the little girl performed similarly to monolingual children with Down syndrome suggesting that this may be an area of difficulty for children with Down syndrome in general.  They concluded that learning to speak and read two languages in the presence of having a learning difficulty, does not necessarily lead to a detrimental effect on a child’s spoken language or word level reading.

Hot off the press is a review of 50 research studies which revealed that there’s little evidence to support view that being multilingual is harmful to the language or social development of children who live with developmental differences. The authors recommend that public policies should reinforce the fact that there is no clinical, linguistic, or cognitive evidence to support recommendations that multilingual families drop any of their languages.

So what does it all mean? Well, the available research indicates that children who have Down syndrome can and do learn two languages. Unfortunately though, this fact is not yet part of mainstream thinking. It’s important to remember that multilingualism is rarely a choice. It’s more a fact of life for your family. You need two or more languages to communicate at home, with family members, in your communities, at school, and so on. And your multilingual children with Down syndrome need to develop all of their languages. There are no scientific grounds for saying that it’s not possible and that families should stick to one language. That is wrong. And not supported by the best available evidence. It’s important to remember too that in some countries such as Canada where there are 2 official languages and Ireland where there are 3 (Irish, English, and Irish Sign Language), multilingualism is actually a legal right.

As for speech and language therapy, recent research from Canada reports that the practice of language intervention in only one language (which is usually the language of the SLT/SLP) cannot be supported by the current research. Multilingual children with Down syndrome and speech and language challenges need intervention that takes all of their languages into consideration in order to help them achieve their potential and participate fully in society.

Elizabeth Kay Raining Bird, Natacha Trudeau, and Ann Sutton (2016) Putting it all together: the road to lasting bilingualism for children with developmental disabilities. Journal of Communication Disorders 63:63-78.