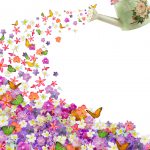 So in your family, you speak two languages or more and you want the same for your children. What’s the best way to do it though? The truth is though that there isn’t one single best way. There isn’t one right way to do it. There’s no one definite way to guarantee your child will become an adult speaking fluently and reading and writing in all the languages. Language development just isn’t like that. By its very nature it’s variable. Why? Because we use different languages for different reasons and topics with different people and that affects language development. Other things that affect language development are the quality of exposure to each of the languages, the amount of quality exposure, the opportunity your child has to use the languages meaningfully, and the status of the languages in the place where you live. It’s a bit like gardening- you can only control how you prepare the ground, plant the seeds or bulbs, water them, weed and so on. You can’t fully control the quality of the seeds. You definitely can’t control the weather! And you can’t control things like the neighbour’s cat digging your seedlings while doing their poo- which is what I saw this morning on my way to work!

What can you do? You can focus on giving your child high quality input in the languages plus opportunities to use them. How do you do that? Have a look at these posts for specific language development tips:

8 Ways To Build Your Toddler’s Vocabulary

What Happens After Your Child Says Their First Words?

Let’s have a look at the options

#1 Have no plan. This is what my Serbian friend did with her little boy. They didn’t have a plan in advance but followed their instincts. She spoke Serbian with him when he was a baby because that’s what came most naturally to her when bonding with him. Her husband spoke English with him because that was his mother tongue. They lived in Germany so that was the language when they were out and about and in school. So initially they had two home languages and the community language. Then they came to Ireland so the community language switched to English. And they were now a minority language at home family. If she spoke Serbian to him and he responded in English, she didn’t pass any remarks. She just continued in Serbian. They spent summer holidays in Serbia. He’s now 19 and confident in Serbian and English. That’s what worked for them.

#2 Make a plan where you work out what you want and how you’re going to do it in advance. Only you can know what’s right for your family and your situation. Do you want to focus on listening and speaking and later reading and writing? How many languages? What ones? Why these? Once you’ve worked this out, then you have other options for how to go about developing your child’s languages. Still keeping in mind, that you only have control over yourself, what you do, and the meanings you attach to what your child is doing. Here are some more options:

# 3 Use the OPOL approach. OPOL stands for one person, one language and started out as a description for how some bilingual parents use their languages with their children. The research shows that this isn’t necessarily the best or most effective way to raise multilingual children. There are issues with it. For example it doesn’t support home language development enough. This is because community languages are so pervasive and have higher status that home languages need intensive support to have a chance. It also goes against a natural tendency in multilingual speakers to mix their languages and switch between them. Multilingual adults do this. Some people do it more than others. Some people do it less. But part of language learning for multilingual children is learning how to do it and when it’s okay to do it and when it’s not. There’s research to show that multilingual children work this out very early on- when they’re toddlers. They work out who understands which language and generally tend to be able to match the language to the listener. There’s also research that shows that in school for example they work out that it’s okay to switch and mix languages when chatting to friends but not when talking to the teacher.

This is something you can talk about with your partner and come to a decision. And it’s something only you will be able to know for yourselves. My attitude is, if it works for your family, that’s great. If it doesn’t feel right for your family, that’s fine too- your approach has to match your family circumstances and values. If you don’t use OPOL that does not mean your child will lose out when to comes to languages.

#5 Time and Place where you choose a time and/or a place where you will speak each language. So you might decide to speak one language at dinner if you have family dinners. Ana Paula Mumy, a bilingual SLP has a lovely activity where you let your child pick the language – you put the flags for the country into a bag and they pick at random and decide for how long or on what topic. Doing it this way does require a lot of focus on your part but if that’s what works for you, then that’s great. You can only do this your own way.

#6 Mix it all up is where you use all of your languages with your child; whatever feels right to you at the time. No hard and fast rules here. One downside though is that your child might be more likely to use the community language as time goes on and lose ability in the home language(s). You can keep speaking the home language(s) so that their understanding continues to develop but home languages need more than occasional use in order to thrive.

So what works for you and your family? Be sure to leave a comment below. If you like this post, please pass it on to your friends.

What I read so you don’t have to!