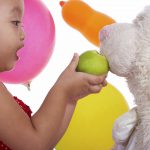 In my last post you learned a simple but effective way to build your child’s early noun vocabulary. If you didn’t get to read that post, you can read it here

Nouns seem to have a special place in early vocabulary, although not in every language. There’s research showing that in some languages like Chinese, Korean, or Japanese, children might learn verbs earlier or at the same time with no special place for nouns in particular. There’s other research that shows the opposite. Why? Generally it has to do with how studies are conducted, what’s focused on, and what is not. But keeping things simple for the moment, let’s have a look at what children’s first words tend to be. First words tend to be concrete, object names. Nouns.

Sound effects and animal sounds like baa or moo

Animal names whether it’s a toy or a real animal like doggie, cat

Outside things and places to go words like outside, sky, swing, shop

But some of the nouns in your child’s first 50 words are also a little less obvious than the names for concrete objects. Things like some body parts, actions (verbs), and places (prepositions). And lots more of course. My little girl’s first words were kiss and tickle– so cute to see her understand them and begin to use them! Children generally say their first real words from anywhere between 8 and 15 months depending on what book or article you read.

But what’s a real first word? It doesn’t necessarily sound like you’d say it yourself. It’s when your child uses the same sequence of sounds to refer to the same object every time. So initially, they might say boo for spoon every time. At about 18 months, you can expect to understand about 25% of what your child says. By 24 months, you should be able to understand about 50-75% of what they say. (If you’re worried that your child might have a speech problem, read this post ).

Learning the names of objects first paves the way your child to learn other, more abstract kinds of nouns. And it gives them a framework for learning action words or verbs. If you know ball and girl then it’s easier to understand and learn kick when you see a girl kicking a ball. Communicating with your child using a diverse range of nouns is a strong predictor of later vocabulary development- diversity matters a lot. It’s all about quality and not necessarily quantity.  Vocabulary and receptive vocabulary in particular (understanding words) are frequently adopted as indicators of language ability and school outcomes. Vocabulary is also important for learning to read and write.

Verbs are important because every sentence has one. When children start to learn verbs, then they can start to combine words into phrases and eventually sentences. One study from 2016 found that typically developing 24 month olds used approximately 50 different verbs, learning approximately 8 new verbs per month. The single best predictor of later grammatical development was verb diversity in spontaneous speech. What does that mean exactly? It means that 2 year olds who were using a range of different verbs, had more advanced grammatical skills at 2 and ½.

Another study from 2017 also stresses the importance of diversity in parents’ language input with their children. By age 2 & ½ diversity of verb input becomes more important for future vocabulary development than the amount of verbs. Quality matters. In this 2017 study, they found 216 different verbs produced by 20 parents with 32 verbs used by more than half the parents. Nine verbs were produced by all parents. What were they? Do, get, go, have, look, play, put, see, want. Other common verbs used by more than 50% of the parents were: know, think, like, eat, feed, cook, fit (like in a puzzle), blow, open.

Verbs are learned later than nouns and make up a smaller percentage of early vocabulary most likely because they involve more complicated concepts than nouns. Remember for nouns, you need to say the name of the thing while your child is looking at it. Early nouns are concrete; they’re things and they stay still (by and large!). Verbs are another story! Verbs are about events (Mary built a beautiful house) and states (conditions or situations: You are good). (Any linguists reading, please forgive my oversimplification here!) And learning the meaning of a verb involves learning what words go before and after it in order to communicate exactly what you mean.

What does this mean for you and your child? It means that it’s important to focus on verbs as well as nouns when having conversations with them. And verbs that have specific meaning. General all-purpose verbs are ones like go but walk, run and step are more meaning specific and better for language development.  Play is general but bounce, lift, toss are meaning specific. Cook is general but stir, fry, and bake are more specific. Exposing your child to more meaning specific verbs provides critical opportunities for them to increase their verb vocabulary. Parents using a diverse range of verbs with more of these specific verbs appears to be a crucial factor for enhancing toddlers’ verb acquisition between the ages of 1 year 9 months and 2 years 3 months.

What can you expect at different ages? These are very loose guidelines as early child language development is highly variable. Why so? Because there are several influencing factors that vary from context to context. These factors include children’s early experiences, their exposure to and usage of their language(s), active participation in interactions with adults, the language of their preschool teachers or carers, parental levels of education so it’s best not to get too attached to ages and stages.

By 24 months your child should be using at least a few verbs. Many children can say 40 verbs by this age. A child with 3-4 verbs at this age would be considered to be at the low end of the average range. Not a problem as long as they continue to learn several new verbs every month for the next 6 months. Children who have no verbs at 24 months and who don’t speed up the rate at which they learn new verbs in the 6 months between 24 and 30 months may be at risk for language development problems.

How can you develop your child’s verb vocabulary then?

#1 Make a list of current verbs they do understand and use. Nothing fancy required here, only a pen and paper. If you can divide the list into verbs they understand and verbs they use, that’s very helpful because understanding generally comes first. How will you know they understand the verb? I remember one day when my little girl was 12 months old and sitting on my lap. I was talking to my niece about her and words she understood. I said something like ‘She definitely knows kiss’ and immediately she sat up and pursed her lips for a kiss- so cute! That’s comprehension! She wasn’t saying it yet though. Another example- I remember a friend’s little girl putting turf into a basket next to the fireplace when I asked her to. You can track progress by noticing which verbs they start to say as time goes on. And you want to see new verbs being learned each month.

#2 When you’re having a conversation with your child, be sure to include meaning specific action words to describe what they’re doing or when something happens like The spoon fell down. Lovely opportunities for meaning-specific verbs abound in their daily routines. For example a trip on the bus can include verbs like get on, get off, step up, step down, pay, wave, look, see, hear, stand, sit and so on. Bath time will involve verbs like splash, pour, spill, dry, wipe , rub, shake, wash, wet and so on. Playing with bricks: build, knock, fall, topple, push, wobble.

#3 Use simple complete sentences when you’re focusing on verbs as you give them lots of opportunities to detect and learn to use the grammar of their language. Again, there are lots of opportunities in your child’s everyday life to do this. If we think about play scenarios, you could say things like The farmer is driving the truck. He likes to drive. He goes to the fields. In short, talk about the toys, give the toys their names, and try to do the action while you say the verb.

#4 Be grammatical– this follows on from # 3 but ask yourself would your words sound okay to other adults in very informal situations? If your answer is no, then revise. You can keep your language simple and still be grammatical.

What were your child’s first words? Be sure and let me know in the comments below! If you like this post, please pass it onto your friends and if you haven’t already, be sure to sign up to get posts delivered directly to your inbox.

Wordbank: An open data base of children’s vocabulary development  http://wordbank.stanford.edu/