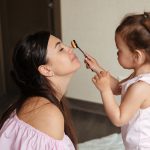 The truth is- it’s complicated! But there are some things we can say for definite and I’ve put those in bold.

In a multilingual family, your child is acquiring two or more vocabularies. So they spend varying amounts of time being exposed or receiving input in each of their languages. That’s just the way it is. It’s likely that they’re not going to have the same level of vocabulary in any one of their languages as a monolingual speaker of each language would have. Why? Because they’re not 2 or 3 monolingual people combined. They use their languages to talk with different people (parents, grandparents, siblings, friends, teachers) for different reasons (telling news, telling jokes, explaining how to play a game, answering a question) in different places (home, on the phone, on summer holidays, at school, at football, playing with neighbours). These three aspects of multilingual language development affect how their vocabulary unfolds.

There are many other factors that influence your child’s vocabulary development. Like how much exposure to the languages they’re getting. Vocabulary development is thought to be particularly influenced by the amount of input because building vocabulary means learning words one by one. Grammar is different because it’s made up of rules that have more general applications like plurals for example.

Opportunities to use the languages are also important as is the quality of the exposure. It’s not enough to talk to your child in the target language(s). It’s how you talk with them. (Keep reading to find out how to do this.) Other influences are how alike or different the languages are (for example Spanish and Italian are closer than Spanish and Mandarin Chinese) and the statuses of the languages where you live. Children who speak home or minority languages are especially dependent on language exposure at home as the community doesn’t support their home language.

The vocabulary levels of monolingual children tend to be the measurement benchmark for multilingual children which isn’t the appropriate reference point. It’s not comparing like with like. As Elin Thordardottir (a respected researcher in the field) says “...bilingual children constitute not one, but many populations …[and] a single norm will not be able to be developed that applies to the bilingual population as a whole.”) It can be useful to have this information to hand though if you meet people who tell you that learning two languages or more causes language problems.

So the bottom line is that speaking two languages or more does not disadvantage children when you measure total and/or conceptual vocabulary. Using monolingual norms to make judgements about multilingual children’s language development is a no-no. If your child’s vocabulary is being tested maybe at school or by a speech and language therapist, make sure you keep your focus on total vocabulary. And also think about the amount of exposure to the languages.

What else does the recent research say?

And a 2017 study looking at 6 groups of bilingual children found large variability in the groups of children when it came to expressive vocabulary. (The language pairs were Maltese and English, Irish and English, French and Portuguese, Turkish and German, and English and Hebrew) They found that children could say more words in their L1 than in their L2 and had greater total vocabularies then conceptual vocabularies which is common in bilingual children. But not all children have a clear L1 and L2…..

There’s a lot of variation in the research and there are lots of studies that report smaller vocabularies for multilingual children. One study which looked at vocabulary in 1738 children between age 3 and 10 in the US found that that although the bilingual children had smaller vocabularies in both languages, the difference had to do with vocabulary associated with home environments. This isn’t an indication of a problem. Of course there was an imbalance because we use languages differently according to the situations we’re using it in.  When it came to vocabulary for school, the monolingual and bilingual children were more comparable. This means that bilingual children are not at disadvantage when it comes to academic performance, learning to read and write, and using spoken language for school related topics.  There’s a lovely line at the end of a paper by Ellen Bialystock and her colleagues: Bilingual children are constructing the world through two telescopes, and their two vocabularies provide the lenses.

A 2011 study in Canada set out to control for many of the influencing factors that I mentioned above. That study found a strong and systematic relationship between vocabulary development and the amount of exposure to the languages in the 5-year-old children who participated. There was a clear relationship between expressive vocabulary (looking at pictures and naming them) and the amount of exposure: more exposure led to higher scores. When it came to comprehension, it wasn’t so clear. They found that once exposure hit 40-60% in either French or English, increasing exposure didn’t lead to higher scores. Interestingly, they also found that when children started to learn the two languages at different times (before 6 months of after 20 months) but were matched for similar amounts of exposure to the languages, they did not differ significantly on any vocabulary measure.   What’s important to remember about this study is that fact that both languages were supported in the community and the languages are fairly closely related.  It’s important to remember the context of your child. What languages are they exposed to? When did they start being exposed to them? Are the languages closely related like Spanish and Italian, or distinct like English and Mandarin Chinese for instance. How much exposure are they getting to the languages? How much opportunity to use the languages?

Several studies have found that nouns tend to dominate in multilingual children’s early vocabularies. Just like monolingual children. All children need exposure to a range of different words: nouns, verbs, adjectives, prepositions so they have the building blocks they need to put words together into phrases and later sentences. Click here for tips on how to develop your child’s range of words.

If your multilingual child’s vocabulary is being assessed by a speech and language therapist because you’re worried that they’re slow to talk, make sure that all their languages are taken into account when counting the words. There are two instruments that SLTs can use to do this. The first one is the McArthur Bates Communication Development Inventories (CDI) which is available in a range of languages. It can be used with children up to age 37 months and includes words and gestures. (https://mb-cdi.stanford.edu/) The CDI is a measure of the words your child says. One limitation of it is that it doesn’t look at what your child does with the words they have. Things like labelling, commenting, requesting, protesting, rejecting, greeting and so on. It’s important to look at how your child communicates using the words they have too. For that there’s the Language Use Inventory which is also available in a range of languages https://languageuseinventory.com/. It’s for children between the ages of 18 and 47 months. Neither of these instruments is particularly expensive. They’re definitely worth it.

How do you build your multilingual child’s vocabulary? I’ve got you covered. You’ll find tips that work here , and here.

If you like this post, please pass it on to your friends. And if you’re on Facebook, I’d love it if you liked the Talk Nua Facebook page. You can find it here: https://www.facebook.com/talknua/